The OECD labor force participation rate – the share of the working-age population that is either employed or unemployed – rose slightly to 72.8%, again approaching the level recorded in the fourth quarter of 2019, with increases in employment translating into corresponding declines in employment. unemployment. These latest figures inevitably rule out any potential impact of current economic and geopolitical uncertainties on the OECD labor market.

The OECD employment rate increased in all groups. It continued to increase for women to 61.5% and men to 76.0% in Q4 2021 (Table 2) and across all age groups (Table 3). Nonetheless, employment rates remained below pre-pandemic levels for all groups.
Increases in the employment rate have been reported in four-fifths of OECD countries. The largest increases (over 1.0 percentage point) were observed in Chile, Iceland, Israel and Turkey, with decreases only recorded in Belgium, Colombia, Latvia, Luxembourg and in Slovenia. 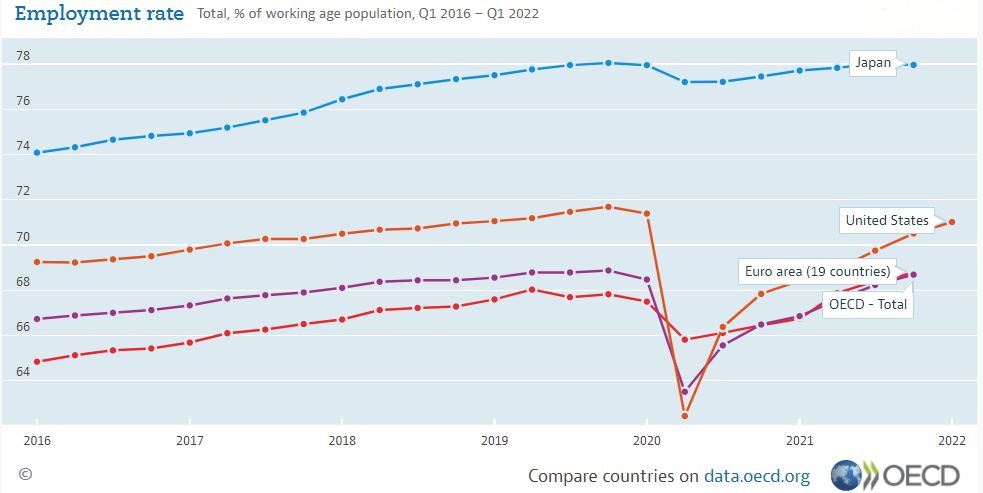 The employment rate rose by 0.4 percentage point to 68.8% in the euro area, with the strongest increases recorded in Finland and Ireland. It rose in Canada, to 74.7%, its highest level since comparable data became available in 1976, and in the United States to 70.5%, still 1.2 percentage points below the rate of before the pandemic. More recent data for the first quarter of 2022 shows that employment rates have increased further in the United States (to 71.0%) and Canada (to 75.1%).

In the fourth quarter, employment rates were above or equal to pre-pandemic levels in 23 OECD countries (Chart 2)1 and, for the first time, in Canada, Lithuania and the Slovak Republic.