Hyderabad: Telangana’s resilience to face tough situations is once again on display with the state listed alongside only two other states that had shown a remarkable recovery in the rate of employment growth in the country. Telangana, Maharashtra and Odisha are the only states that topped the pre-pandemic employment rate in April this year.

The Reserve Bank of India, in its latest report, cited data provided by the Center for the Monitoring of Indian Economy (CMIE) for the month of April, indicating that the employment rate in Telangana increased significantly after the Covid-19. This welcome development comes at a time when the country is reeling from an increased unemployment rate which has become a thorn in the flesh of the BJP government at the Centre. 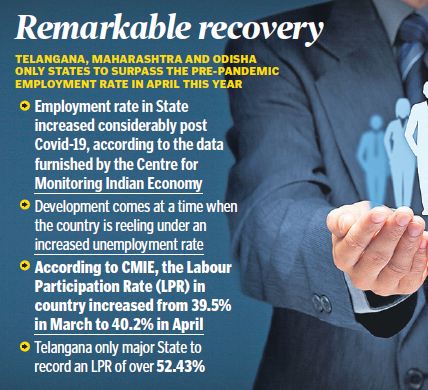 According to the CMIE household survey, the labor participation rate (LPR) in the country rose from 39.5% in March to 40.2% in April. Telangana, however, was the only major state to record an LPR of over 52.43%. The LPR is the ratio of the working population to the population over 15 years of age.

You can now get handpicked stories from Telangana today on Telegram every day. Click the link to subscribe.