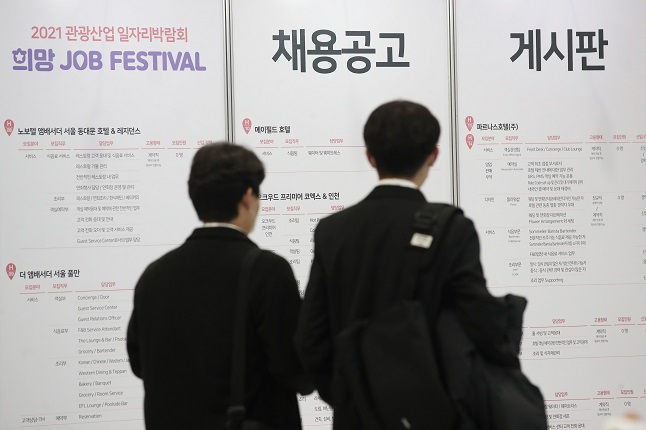 Job seekers check employment information during a job fair held at the aT center in southern Seoul on Nov. 16, 2021, file photo. (Yonhap)

SEJONG, Jan 31 (Korea Bizwire) — South Korea’s unemployment rate calculated based on the number of full-time workers who work more than 40 hours a week has slipped to 50% for the second year in a row, a lawmaker said on Sunday.

The country’s full-time equivalent (FTE) employment rate has stood at 50% for two consecutive years (58.6% in 2020 and 58.8% in 2021) for the first time since 1981, according to an analysis of economically active population per Rep. Yoo Gyeong-joon of the main opposition People Power Party.

The FTE employment rate is an indicator that is calculated by counting a worker who works 40 hours a week as an employee.

“This policy has resulted in the worst outcome, with full-time jobs replaced by part-time jobs for young people and financially supported jobs for older people.”